The lawn grubs (also known as white grubs or armyworms) are white larvae of a beetle, that have about half an inch in length and the shape of the letter C. They can be the larvae of various species of beetle, and they have soft bodies with legs near the head. They feed on the roots of the grass and organic matter in the soil, causing sections of grass to die. After they grow and turn into adult beetles, they mate and lay eggs which produce even more grubs. That’s why they need to be stopped as soon as possible, and in this article, we’ll discuss how to get rid of lawn grubs.

These nasty pests can cause serious damage and the Queensland’s Sunshine Coast is known to have problems during the warm months. Summer rains fill the earth with water, which then makes long, beautiful and lush grass to grow. But this attracts the beetles who lay their eggs and create the lawn grubs, which eventually destroy all the beautiful grass. 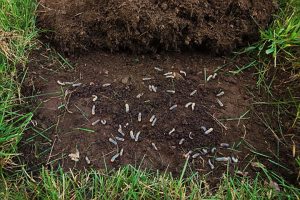 Many homeowners are affected, and some have so many grubs and beetles that they are even seen climbing on walls and fences. These pests have reached epidemic proportions during the last few years. In certain periods there are so many of them, that some of the birds who are feeding on grubs become so fat they can’t even fly.

They are also known as “armyworms” because they start in one section of the lawn and make their way across it along a set line, just like soldiers in a battle.

So how do you know that you have grubs in your garden? Well, there a few ways to find out:

– Irregular patches of brown grass – since the grass eaten by these pests dies, it then turns brown and it is visible from above. Since the grubs are living underground, they would have been hard to discover otherwise, but luckily they leave clues

– Teared up the lawn by magpies or crows – these two animals might be helpful because they feed on the grubs, but they also destroy your lawn in the meantime. So you can’t rely on them to fix the problem, and you need to take action right away

– Beetles in your garden – some of the species of beetles who create grubs are active during the night (the tan coloured chafer beetle), while others can be seen flying through the day (Japanese beetles). Their presence is a good indicator of future grubs in the ground

– Grubs in the soil – the only way to actually see the grubs is to make a cut in the soil and look for them. If you find more than 10 grubs per square foot, then you have a serious issue and you need to call a specialist

The technician of the pest control company should be aware of the type of grubs in your garden, as each one has its own particularities. Applying the wrong insecticide might not solve the problem or might cause harm to the environment, so that’s why it is important to know what kind of grubs you are dealing with.

Regardless of the species, all grubs feast on plant roots starting with July and until the ground freezes. Then they bury themselves deeper into the ground in order to stay warm and crawl back to the surface when the weather gets warmer. They eventually moult into adult beetles, which fly around and reproduce to create new grubs.

The types of grubs depend on the species of beetle they belong to, and the most common ones are:

Don’t get fooled by their name, because that doesn’t mean that they only live in Europe. They are originally from there, but they expanded all across the globe. The adult beetles have a brown and oval body of medium size. They mate from mid-June to late July (during the night), and females can lay up to 30 eggs in one month. Then, the reproductive process is similar to the one described above.

This beetle is native from Japan and expanded to America in the 20th century. Adults are grey with black splotches. They emerge in late June and become active in July. Their life cycle is similar to that of the European Chafers.

As the name suggests, they come from Japan. Adults have an oval shape, copper wings, and metallic green hue bodies. They mate during the night in June and July, and females also lay around 30 eggs in a month. The life cycle is similar to the one described above.

Just like the previous 2 species, they also come from Japan. Adults have around 3/8 inches and a brown-red hue. They are active in July and August, mostly during the night. When the sun rises, they burrow down into the soil and get back the next night, searching for a mate. Females can lay 40 eggs or more, and they hatch in two weeks. Their life cycle is pretty similar: they burry into the soil during the winter, get back in the spring, pupate in late May and moult into an adult in late June or early July.

The May / June Beetle

Their grubs have the classic C-shape and a life cycle of three years. They cause the most damage at the end of the summer of the second year, and during the third year, they emerge into red adult beetles. These beetles fly during the night and are attracted to lights.

These beetles have a life cycle of one year and they do not destroy the lawn. Adults may feed on fruit, while larvae feed on decaying organic matter. They are larger in size than the May / June Beetle, and similar in colour to the Japanese Beetle (although they have more green, while the Japanese Beetles have brown wings). They fly during the day and have a few other habits that separate them from the other species. This species does not destroy the lawn and during the night the larva will crawl on its back, with the feet in the air.

These insects also have a life cycle of one year, and they do destroy the lawn. The larvae have around ¾ inches in size (half the size of the June Beetle larvae), but they can cause so much damage to roots, that the grass can often be lifted like a carpet. The beetles fly during the night and are attracted to lights.

This species has a life cycle of just five months, and the grubs are very small. They usually do not cause problems to the lawn, but they can become an issue if there are more than 30 grubs per square foot. They are usually a problem on golf courses.

The fall armyworm is a species from the order of Lepidoptera and is the larval stage of the fall armyworm moth. They got their name because of their large scale invasive behaviour. They can destroy a wide variety of crops and cause a lot of economic damage.

The White Curl Grub is not actually a species, but a general term used to describe the larvae of multiple species of beetle, including the ones presented above. The name refers to their colour and its C shape.

The best method of getting rid of these nasty pests would be to apply chemical insecticides. First of all, you must make sure that the brown patches in your lawn (aka the dead grass) are actually caused by grubs and not by a lack of fertilizer in the soil or water.

After lawn grubs have been confirmed, it is very important to identify their species in order to know which insecticide to apply and in how much quantity. Unless you are an expert in grubs and beetles, it is recommended to call a pest control company, and we are here to help!

If your applying treatment during a dry spell remember to water the lawn immediately after the insecticide has been applied. This will allow your treatment to penetrate deeper into the ground and it will also move the chemical off the grass (making it safe for children or pets). If rain is on the forecast use this to your advantage, apply the grub treatment while the rain is falling to ensure a successful treatment. It’s important to reapply the treatment again within 2 weeks because of lawn grub eggs take around two to five weeks to emerge from an egg. Any missed eggs or lawn grubs will be exterminated on the re-application treatment

It is very difficult to prevent lawn grubs from laying eggs in your lawn. However, some prevention products can be used to prevent and reduce egg-laying and kill the larvae in the early stages before the grubs cause any major damage to your lawn. Some products are more powerful and will kill the grubs currently found in the soil, while other products are used for prevention. Discuss this with your pest control technician.

For a successful lawn grub treatment, there are many different liquids and granulated insecticide formals you can water into your lawn for armyworms and moth grubs. The best treatment for your lawn is the one applied by a professional, as only he can use the right type of product and in the right amount. 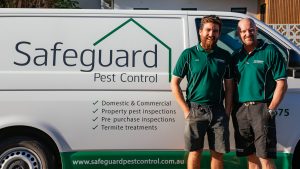 Safeguard Pest Control is a family-owned and operated company that has been operating since 1989. We have extensive knowledge and experience in this field and can provide you with professional results. Our services have high standards and we offer pest solutions to residential, commercial and corporate areas, hospitals and schools. We are using the latest technology, in order to offer great results with no impact on your health or that of the environment.

Early detection can save you a lot of money, so it’s better to act now than to be sorry later. Book your Safeguard lawn grubs inspection now by calling 07 5477 6675 or emailing info@safeguardpestcontrol.com.au and allow us to protect your lawn against grubs.

2 thoughts on “How To Get Rid of Lawn Grubs”