What do termites look like? Termites of every species may look similar to the naked eye, but close up, there are distinctive differences for each species and genus. No matter what type of termite you may have in your home or structure, a good company with three decades of experience can help you get rid of these unwanted pests once and for all. 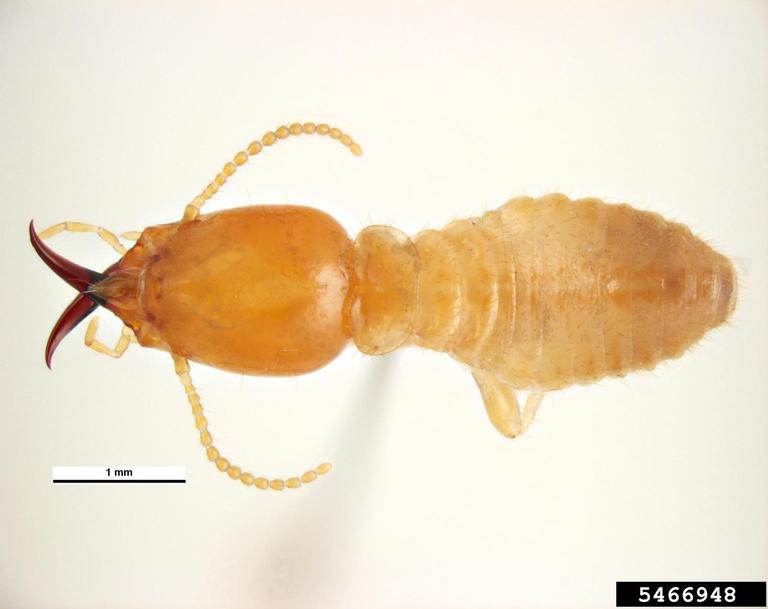 A species of the Rhinotermitidae native to Australia, the Coptotermes acinaciformis, a subterranean termite is a subterranean social insect that builds a communal nest. This species can be found underground or in the root crown of a tree. Workers forage in the area surrounding without emerging on the ground surface. These termites cause substantial damages to a building’s wooden parts and trees.

In Australia, several of these species can be found and are hard to differentiate among one another. Most likely, the C. acinaciformis can be confused with the C. lacteus and the C. frenchi. This species is between five and six-and-a-half millimetres long and are slightly larger than the other two species. Their heads are almost rectangular. Soldiers have no eyes but have large jaws and brown heads. Workers are pure white in colour with no eyes.

It takes three to five years before the colony grows large enough to damage nearby structures and buildings. 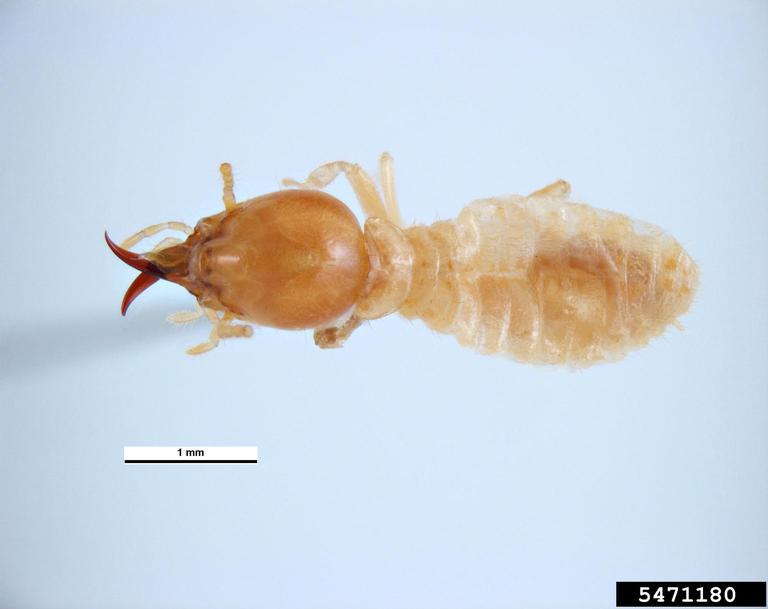 Coptotermes frenchi, C. lacteus also known as the milk termite, Coptotermes lacteus is a termite species in the Rhinotermitidae family, which is native to Australia. These termites build a communal nest that looks like a mound, as they are social insects. A gallery network extends from the mound to the soil nearby, which enables workers to forage in the area surrounding without having to emerge on the ground surface. In Australia, several termite species are hard to distinguish from each other. These termites have heads that are pear-shaped and are between four to four-point-eight millimetres long. They are milky-white in colour, hence the name milk termite. 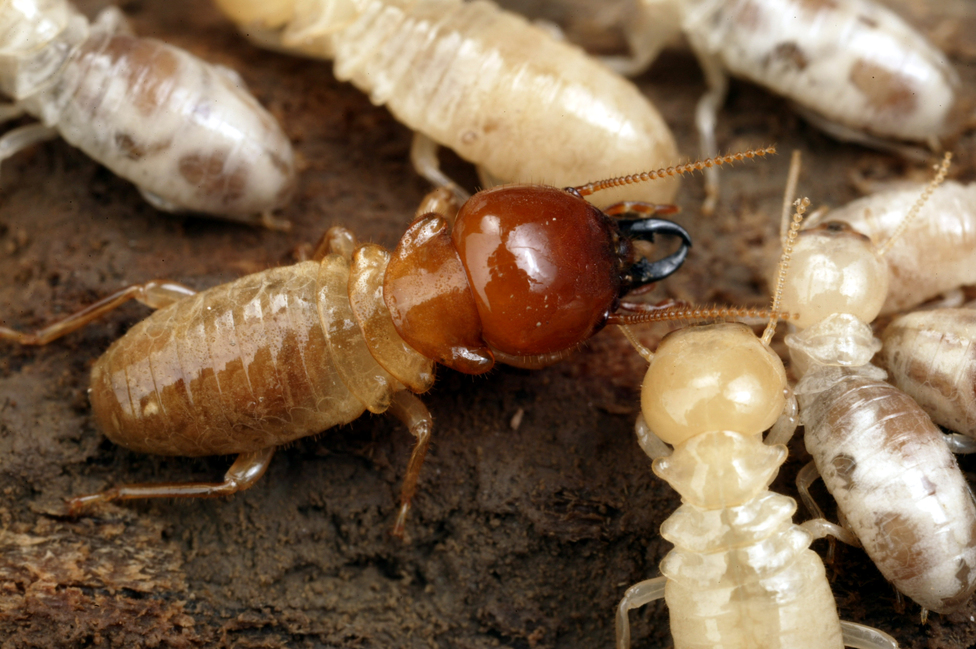 Also known as the Darwin termite, the giant northern termite is a species of termite only found in Australia’s northern sections. It is the largest of all the different species of termites. They have large brown heads and are cream in colour. Of all termites, it is the most primitive. Unlike cockroaches, the reproductive giant northern termites have wings that are a lot longer than their abdominal sections. Soldiers are between eleven to thirteen millimetres long, workers are between ten and twelve millimetres long and alates are thirty-five millimetres long with a fifty-millimetre wingspan. Their external appearance suggests a close relationship between cockroaches and termites. 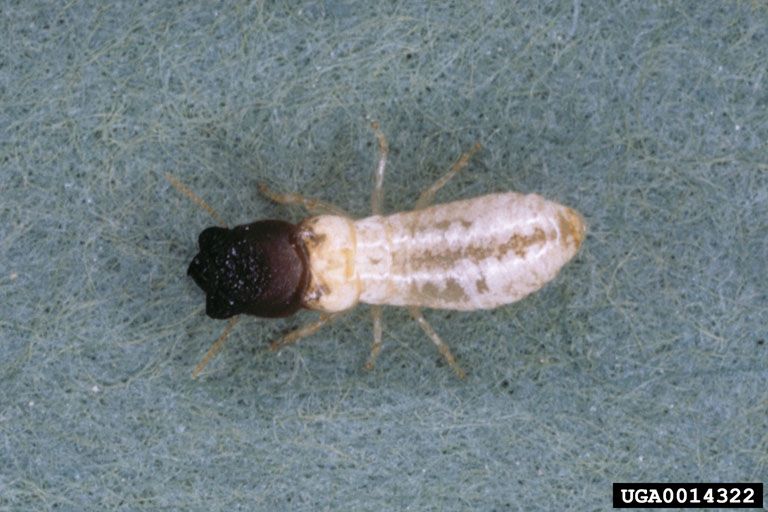 From the Kalotermitidae family, the Cryptotermes genus of termites is one of the most significant and economical genera of dry wood termites. There are about seventy species of Cryptotermes, all of which are medium brown and are between eleven and twelve millimetres long with wings. Usually, the median vein curves in the outer third to terminate in the costal margin and shed wings are about nine millimetres long. When dry, there is a prismatic sheen in brevis wings. At times, the Cryptotermes termite genus is referred to as Powderpost termites due to the frass, or fecal heaps of pellets that gather underneath rotten wood. The frass is similar in shape and size to other Kalotermitidae species of drywood termites. The pronotum of the soldiers of this species is about as wide as their head with a large cavity in front. The cavity outline is almost circular, shaped almost like a bowl from an anterior view. The rest of the head’s upper surface is smooth. The soldiers’ heads are shaped like plugs, also known as phragmosis to block the exit and entrance holes to the nest 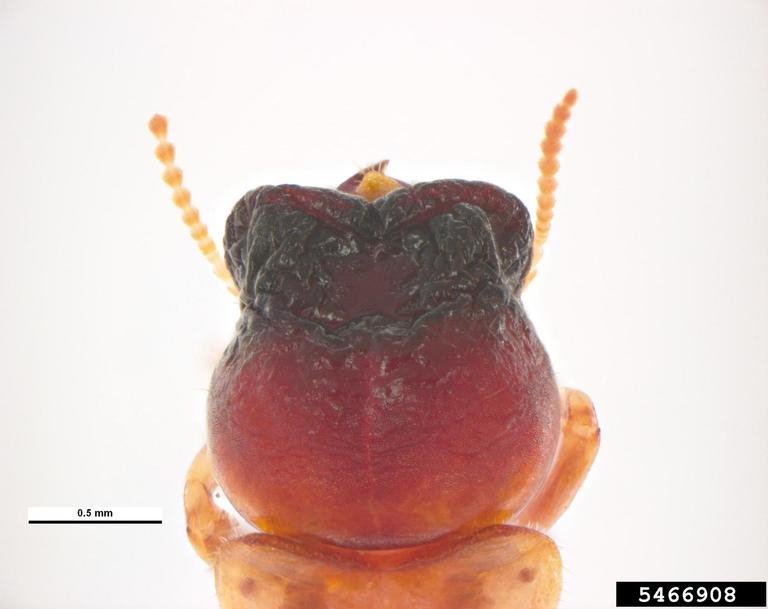 Also known as the powder post termite, or the West Indian drywood termite, Cryptotermes brevis can live within wooden furniture or completely within structures made of timber without a water source. Inadvertently introduced to newer locations quite frequently, this species of termites cause damage to buildings, wooden objects, and structural timbers. This termite species is a eusocial insect and build colonial nests, creating chambers for short galleries and rearing larvae. They look like other species of dry wood in being deeper and larger-bodied than other termites that dwell underground. This termite walks more slowly and has shorter limbs and is blind. They have strong claws to grip wooden surfaces and strong jaws for chewing wooden fibres. Their antennas resemble the beads of strung necklaces.

The king and queen have chitinous, dark brown cuticles but other colony members have softer bodies. The soldiers are between four and five millimetres long with black, colourless and wrinkled square heads. They have relatively small mandibles and can use their heads to prevent ants from being able to access the nests or can block the galleries. Their pseudergates are shaped like sausages and younger termites perform worker caste functions and feed the other colony members, consume wood, excavate tunnels and care for the brood. Two pairs of transparent wings are membranous with darker veins that run along near the lead edge. It is not that easy to identify this species of termites and usually, the result comes from the structure and appearance of the heads of the soldiers. 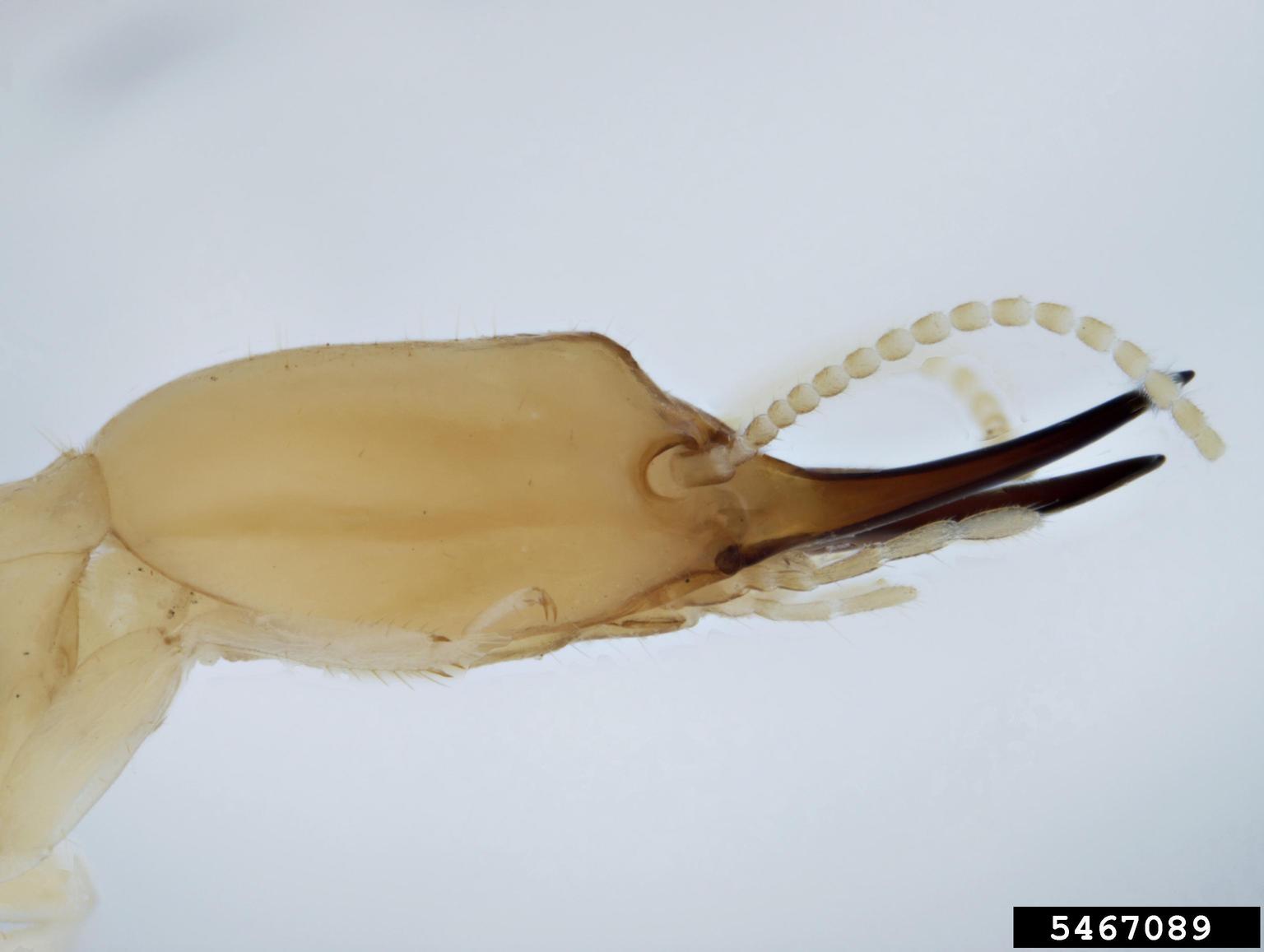 Heterotermes ferox is considered a minor structural pest that can damage your home by eating door frames and soft timber. Usually, this species of termites cause superficial damage to skirting boards and door frames. The workers are the food-harvesters within the colony. These consume wood products and wood to extract the cellulose. Workers excrete digested cellulose for other castes to consume after they return to the nest. Attracted to moist places, subterranean termites build their colonies in the soil. Around your home, the standing water creates an environment ideal for these species. High-risk environments include poor drainage and leaky pipes. In defending their colonies, the soldiers and workers of these termites are less aggressive and sluggish. Found in Western Australia, South Australia, Victoria, Australian Capital Territory, New South Wales and in South-East Queensland. Pale brown in colour, these termites are between three and seven millimetres in length. The body is shaped like a cigar, not sclerotised and white. There are no anterior lobes and the pronotum is flat. At the apex of the abdomen, there are two segments of abdominal cerci. 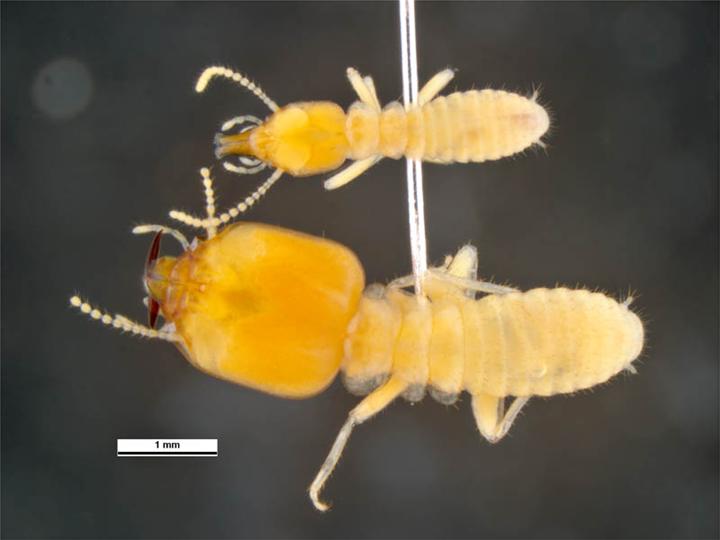 An Australasian and South-East Asian genus termites in the Rhinotermitidae family, the Schedorhinotermes intermedius is a destructive termite species with two soldier types, namely Minor and Major. All soldiers of this species are yellowish-brown and pale in colour with a flat pronotum that has no anterior lobes. There are two abdominal cerci segments and four tarsi segments. There is a fontanelle and on their inner faces, they have mandibles. The Minor Soldier is about three to five millimetres in length and has slender mandibles and a narrow head. The Major Soldier has a thick exoskeleton, a bulbous head and is between five and seven-point-five millimetres in length. These species love building their nests underneath root crowns, tree stumps and man-made structures. They prefer areas where timber or wood is directly in contact with the soil. The reason is that it speeds up the decomposition of timber and wood. Commonly found in Western Australia, the Northern Territory, Queensland and the New South Wales, this species is considered to be a major pest along Australia’s east coast. 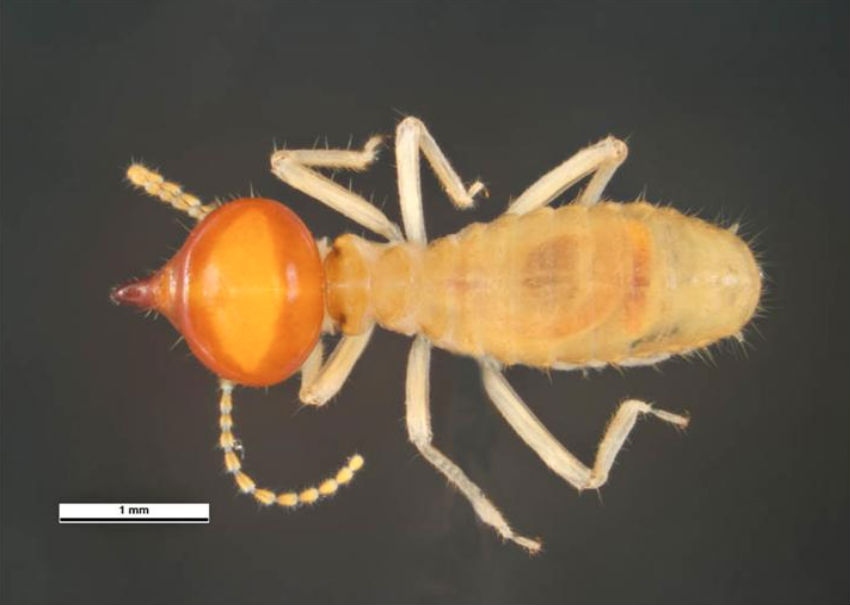 The Nasutitermes fumigatus nest on decayed wood or the ground and live in smaller colonies. They feed on weathered, damp wood such as verandas on house exteriors and deck boards. In dry conditions, these do not attack sound structural timber. Compared to workers, the soldiers of this species are smaller with a body up to four millimetres long. The head is shaped like a pointed snout, or nasute and is pale orange. A native to South-East Australia, this species of termite nests in fire damage, decay or root crowns. They build nests shaped like balls higher up trees damaged by fire with tunnels that connect to the soil. Out of the tree to the ground, subterranean tunnels radiate. 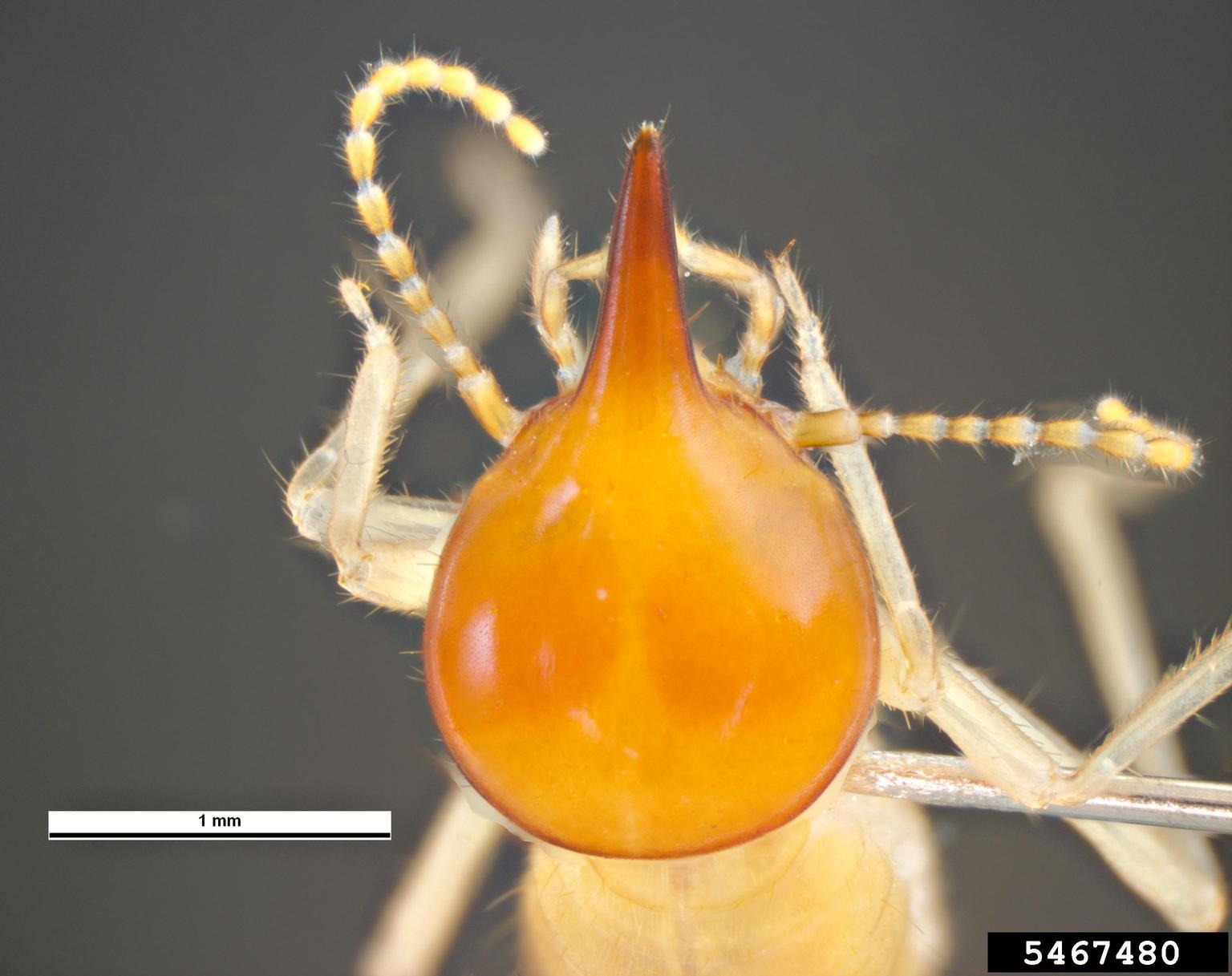 Also known as the Tree Termite, Nasutitermes walkeri is an arboreal termite species found in southeastern Queensland and ni the eastern New South Wales, Australia. The soldiers of this species have a round head, yellowish-brown bodies and straight, long mandibles. They are between five and seven millimetres long. Endemic to Australia’s east, you will find this species in southeastern Queensland and the New South Wales mostly in wooded areas, scrubland, near the coast and in the mountains. These termites create tubes down the tree trunk and feed at ground level, mainly. The exterior of the nest has a papery, thin surface and feed on mostly moist timber. These attack poles and fence posts but unless there is decay, don’t damage the woodwork in the home. Initially, the nests are established in tree crowns where there is some timber damage from decay or damage. Later, a most substantial nest is built, at times as high as twenty-metres above the ground.