Termites are the second most numerous insects on Earth, and while they do have their important role in the ecological balance, they feed on almost anything that comes in their way, including people’s homes. They are known for causing billions of dollars of damage worldwide, and way over 100 million dollars in Australia each year. There are more than 2,000 known species of termites, and only a few of them are pests. Most are living far away from human inhabited areas, while others are a part of it. A colony includes workers, soldiers, and reproducers, each one with its own role. In this article you will find out the answer to the question: do termites eat hardwood?

The workers are building and maintaining the structure of the nest, while also taking care of eggs, soldiers, and nymphs. The soldiers are similar, but they have bigger heads and stronger jaws. They can’t feed themselves and they are fed by the workers.

The alates are those who fly away from the nest in order to mate and establish a new colony. After finding a good place, they mate and lay the eggs. They are often confused with the alates of ants, but they are slightly different. They don’t have a narrow waist as ants do, they have 4 translucent wings of the same size and shape. Flying ants have a narrow waist, wings of different sizes and transparent wings.

No matter the category of termites and their role in the colony, they all feed on cellulose. This can be found in various types of wood, as well as in paper, cardboard and other items around the house. They can feed 24/7, and even if they slow down a bit in the winter, they are still active.

What Type of Wood Do Termites Eat?

They can feed on just about any wooden item inside or around your home. They might start with the frames of the doors and windows and then continue with the beams in the ceiling and landings too. Boxes on the floor and documents found on shelves may be attacked as well. Along their way, they will even destroy electrical wires and various cables. 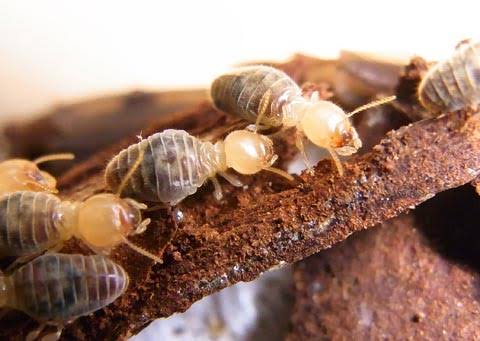 They can devour an entire beam or balk, including its heart. If not stopped, they will eventually leave just a hollow shell behind. Subterranean termites have been found eating almost any kind of wood. And yes, this includes hardwood, ironbark or various types of treated timber. They do have their own preferences, but if needed they can eat almost anything that contains cellulose.

They are consuming the wood from the inside out, trying to be as subtle as possible, so they can feed in silence without being disturbed. Since its members are constantly replaced (including the queen), a colony basically has an unlimited lifespan. As long as there is something to feed on, the colony can thrive and expand. But even so, they are leaving certain clues, and if you notice any of them it’s better to act immediately.

You might think that since they are subterraneous termites and live under the ground, there is no way they can reach the beams in your ceiling. However, these hungry little insects will take advantage of any cracks and hollow walls, and will create trails that will lead them to wooden surfaces. They don’t eat concrete but will take advantage of any tiny cracks in order to travel across it.

My House Is Built from Hardwood. Is it Safe Against Termite Attack?

Australia has a wide variety of hardwood trees that are strong and durable, and it’s no wonder that they are used when building homes. Many people are surprised to find out that certain species of termites in Australia actually love to feed on the hardwood. One of them is the Nasutitermes, which gets its name from the soldiers that have a Nasute head. This means that it has a long and special snout that helps in destroying hardwood. Other species that consume it are the Schedorhinotermes and the Coptotermes.

So even if your home is made of hardwood, it’s definitely not safe against termites. Thinking so and not taking action can be a very costly mistake on the long term. Call us as soon as you notice any of the signs presented above, and we will help you get rid of the colony before it will cause more damage to your property.

You might think that by eliminating the infested source of wood, you will eliminate the problem. This strategy might work for certain species of termites that have the entire colony inside the wood, but it doesn’t work for subterraneous termites. Their colonies are deep under the ground, and they only climb to the surface looking for wood.

If you eliminate the affected wood, you will only kill a small part of the colony, those who were feeding there at the moment. The others will simply look for the next target.

So the old saying of “if you can’t even drive a nail through hardwood, there is no way that the termites could eat it”, is just a myth. Don’t rely on false information. Do your own research, but most important of all, call an expert.

Even some bait stations used to attract and then to kill termites are filled with Tasmanian Oak, which is a hardwood. So as you can see, these insects definitely feed on it. But unfortunately, homeowners of hardwood houses usually avoid doing their annual termite inspections, thinking that they are safe. This could be a big mistake and might cause a lot more economic damage than the small cost of an inspection. If your home gets infested right now and you only do the inspection 2 years later, you give them plenty of time to destroy multiple wooden areas in your home.

Be Careful Who You Trust

We once had a client who found a nest of termites on a tree in their backyard. He called another pest control company which told him that this species will not feed on hardwood and that his home is safe, yet he, later on, found holes and galleries inside a wall. That company was not experienced and they misidentified the species of termites. They thought it was the Heterotermes (which feed only on softwood), but it was actually the Nasutitermes, a species that feeds on the hardwood.

The damage to the home was significant, and the nasty pests even reached some hardwood beams in his roof. The process of eradicating the colony was long and costly, and it could have been avoided if the problem had been detected earlier.

Also, do not use home remedies as they are ineffective. Not only this, but they can even do more harm, by dispersing the colony to multiple other places around your home. Instead, give us a call and we will inspect your property and then come up with a customized plan of eradication and protection.

Who Should I Call?

At the first signs of termite infestation, we invite you to call Safeguard Pest Control, a family-owned and operated company with more than 20 years of experience. We have extensive knowledge and all the needed tools and equipment to get rid of termites.

We work according to the highest standards in the industry, and we offer solutions to all kinds of properties, whether they are residential, commercial or corporate. Among our clients, we also had schools and hospitals, and have helped hundreds of people over the years.

We’ll start by carefully inspecting your entire property to find out all the nests and colonies, and we will take action accordingly. We have a wide range of treatment options, that suit all types of homes and all budgets. Our employees are highly trained and skilled and licensed to perform inspections and treatments. They will also train you on how to prevent their reappearance.

So to answer the question in the subtitle, you should call us as soon as you notice the first sign of termites. The sooner you take action, the smaller the damage and the costs of treatment. Book your Safeguard Termite Inspection now by calling 07 5477 6675 or emailing info@safeguardpestcontrol.com.au and allow us to protect your greatest asset, your home.